Omega-3 (not mentioned by the study on this page)

Studies in both of the categories Pancreatic Cancer and Meta-analysis are listed here:

Despite new and exciting research and renewed optimism about future therapy, current statistics of survival from pancreatic cancer remains dismal. Patients seeking alternative or complementary treatments should be warned to avoid the hype and instead look to real science. A variety of relatively safe and inexpensive treatment options that have shown success in preclinical models and/or retrospective studies are currently available. Patients require their physicians to provide therapeutic guidance and assistance in obtaining and administrating these various therapies.

These therapies are all currently available and are reviewed in this paper with emphasis on the most recent laboratory research and clinical studies.

Vitamin D section of the PDF 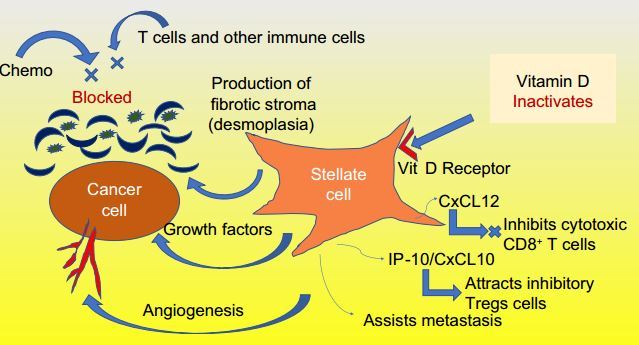 Paricalcitol is a modified form of vitamin D that acts as a vitamin D receptor agonist and is not associated with systemic toxicity of vitamin D resulting in conditions such as hypercalcemia. It is currently available intravenously or orally to treat or prevent hyperparathyroidism in dialysis patients.
Recently, investigators at the Salk Institute for Biological Studies have found that paricalcitol helps break though the pancreatic tumor’s stroma, which acts as a protective shield, incasing the tumor. The stroma is part of an extracellular matrix obstructing the tumor’s vasculature and inhibiting
chemotherapy delivery to the tumor site. Specifically, the pancreatic stellate cells (those surrounding the tumor cells) are particularly activated in pancreatic cancer, driving the production of the stroma, as shown in Figure 1. These stellate cells have high levels of vitamin D receptors, and the blocking of these receptors by paricalcitol inactivates the stromal production.6 These stellate cells also produce cytokines and growth factors that enhance local tumor growth, contribute to angiogenesis, and enable metastasis. Furthermore, stellate cells metastasize along with the cancer cells assisting in their seeding, survival, and proliferation.7
In mice, when paricalcitol was given along with gem- citabine, stromal activation and tumor size were both significantly reduced, resulting in a 57% prolongation of survival.7
In addition to stromal inactivation, vitamin D has been shown to exert antiproliferative effects, secondary to the upregulation of the cell cycle inhibitors, especially p21 and p27, which control cell proliferation, differentiation, and division.8 Studies have shown a reduction of several pancreatic tumor lines in mice treated with paricalcitol correlating with the degree of cell cycle kinase inhibition.8
Lastly, paricalcitol has been shown to increase T cell penetration into the tumor. In a small Phase I study in patients treated with paricalcitol for 1 month prior to tumor resection, a 10- to 100-fold increase in the number of T cells was observed in and around the tumor.9 The hope that vitamin D affects the tumor’s immune environment has inspired the start of a Phase II study combining paricalcitol with immunotherapy and chemotherapy.10
Vitamin D may have many other anticancer effects, as well, not limited to pancreatic cancer. Evidence suggests that vitamin D promotes apoptosis leading to quicker cancer cell death.11 This has been evaluated in other cancers such as retinoblastoma.12 Vitamin D has been shown to inhibit angiogenesis within tumors.13 Tumors cannot grow larger than a few millimeters or metastasize unless they are well vascularized.

In terms of safety, as stated, paricalcitol is less likely to produce hypercalcemia, hyperphosphatemia, or elevations in calcium and phosphorus levels compared to other forms of vitamin D, primarily due to its decreased effect on intestinal absorption of calcium and phosphorus.14
In a Phase I dose-escalating trial of IV paricalcitol in men with advanced prostate cancer, patients received as much as 25 gg 3x/week intravenously. Significant hypercalcemia was rare, and the maximally tolerated dose of paricalcitol was not reached in that study, indicating that even higher doses may be free of significant side effects.15 Paricalcitol has also been shown to be well tolerated in mice at relatively high levels.
In summary, paricalcitol given intravenously at a dose of 25 pg, 3x/week, appears to be well tolerated with little risk of serious adverse side effects in humans. It has worked well in vitro and in vivo (mouse studies) indicating possible benefit in combination with chemotherapy in human pancreatic cancer. Large-scale studies in humans are just beginning.

Printer Friendly PDF this page! Follow this page for updates
This page is in the following categories (# of items in each category)
Cancer - Pancreatic 54 Curcumin 10
Edit Comments Files 2