Vitamin D prevents Hepatitis-C and helps treat it (many studies)

New Guidelines Urge Most U.S. Adults to be Screened for Hepatitis C - March 2020

screening of all adults between the ages of 18 and 79.- New York Times
Screening for Hepatitis C Virus Infection in Adolescents and Adults US Preventive Services Task Force Recommendation Statement

&nbspDownload the PDF from Vitamin D Life
Note: The word VITAMIN does not occur once in the recommendation
Note: The Hepatitis C test appears to range from $24 to $50 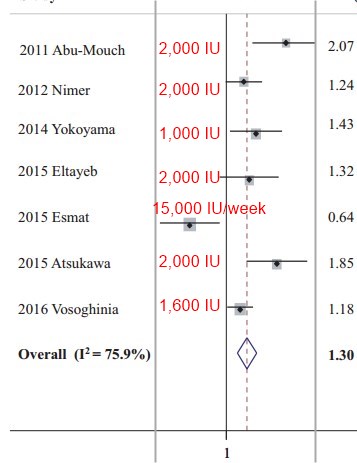 Probably would have had far better success if had used larger dose of Vitamin D - say 4,000 IU 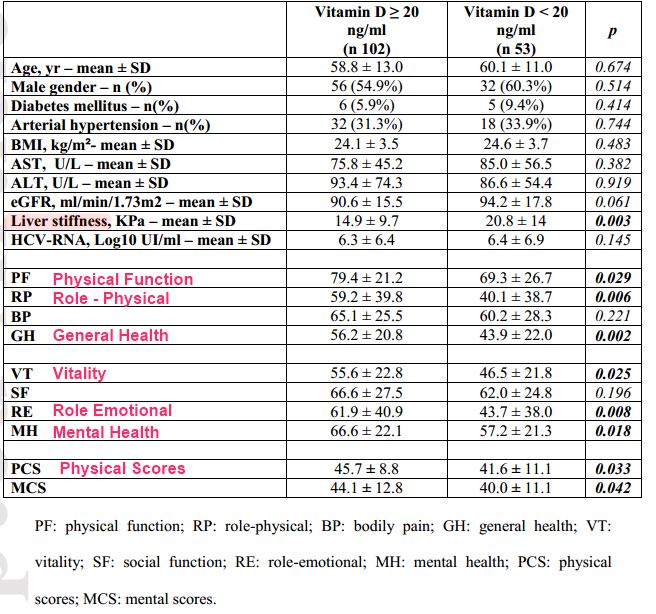 Vitamin D deficiency is common in patients with chronic liver disease, including chronic hepatitis C (CHC). However, the interplay between serum 25-hydroxy-vitamin-D (25-OH-D) and health-related-quality-of-life (HRQoL) in CHC subjects has never been investigated. The study aimed to analyze the relationship between vitamin D deficiency and HRQoL in CHC patients. One-hundred-fifty-five consecutive CHC patients completed the Health-Survey-Short-Form-36 (SF-36) and their serum 25-OH-D levels were evaluated. Vitamin D deficiency was defined as a 25-OH-D level lower than 20 ng/mL.
We identified 53 patients (34.2%) with vitamin D deficiency, who showed a mean 25-OH-D serum level of 12.5 ± 3.7 ng/mL.
Vitamin D deficient patients had significantly higher liver stiffness values compared to those with normal levels (20.8 ± 14 vs 14.9 ± 9.7 KPa, p=0.003). In a multivariate linear regression analysis, vitamin D deficiency was independently associated with a lower SF-36 physical-component summary score (p=0.034) and SF-36 mental-component summary score (p=0.042) after controlling for age, gender and liver stiffness.
Specifically, vitamin D deficiency was associated with 3 out of 4 physical domains of the SF-36 [physical-function (p=0.016), role-physical (p=0.016) and general-health (p=0.002)] and 3 out of 4 mental domains [vitality (p=0.020), role-emotional (p=0.005) and mental-health (p=0.025)].
In conclusion, the present study provides novel evidence demonstrating that vitamin D deficiency can contribute to a decreased physical and mental HRQoL in CHC patients. Given that serum vitamin D levels are easy to evaluate and deficiency treatment is simple and inexpensive, clinicians should be aware of the potential multiple benefits of vitamin D supplementation in CHC patients. This article is protected by copyright. All rights reserved.

BACKGROUND:
Although a contributory role of vitamin D levels for the development of chronic hepatitis C has been suggested, the efficacy of vitamin D supplementation in combination with conventional antiviral therapy consisting of pegylated interferon-α (Peg-IFN-α) injection and oral ribavirin (RBV) remains unclear. We investigated its efficacy in the treatment of chronic hepatitis C via a meta-analysis of randomised controlled trials.
METHODS:
We searched PubMed, EMBASE, the Cochrane Library, ClinicalTrials.gov and the bibliographies of relevant articles to locate additional publications in September 2016. Three evaluators independently reviewed and selected eligible studies based on predetermined selection criteria.
RESULTS:
Of 522 articles meeting our initial criteria, a total of seven open-label, randomised controlled trials involving 548 participants, were included in the final analysis. Vitamin D supplementation in combination with Peg-IFN-α injection and oral RBV significantly increased the rate of viral response for hepatitis C at 24 weeks after treatment in a random-effects meta-analysis (relative risk = 1.30; 95% confidence interval = 1.04-1.62; I2 = 75.9%). Also, its significant efficacy was observed in patients with hepatitis C virus genotype 1, which is known to be refractory to antiviral therapy.
CONCLUSIONS:
In summary, we observed that additional use of vitamin D has a positive effect on sustained viral response rates of patients with chronic hepatitis C infection. However, we cannot establish the efficacy because of substantial heterogeneity, a small sample size and a low methodological quality.

Update May 2016 on the virus which affects the liver 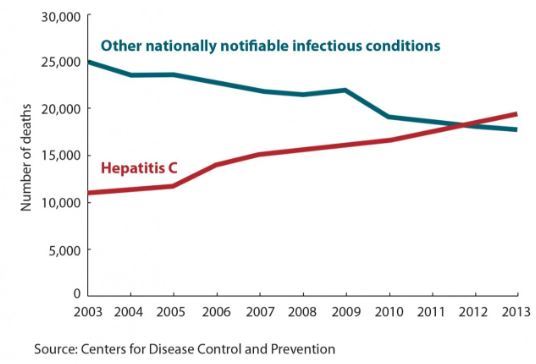 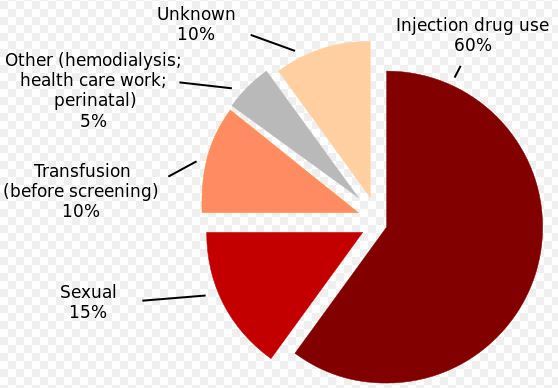 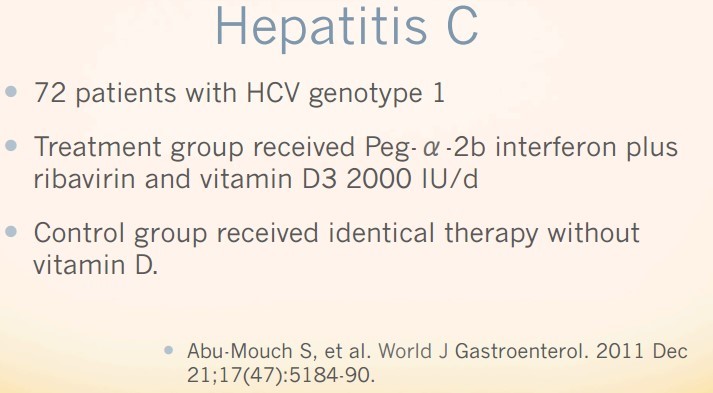 The Interplay between Zinc, Vitamin D and, IL-17 in Patients with Chronic Hepatitis C Liver Disease - 2015

OBJECTIVES:
To assess zinc (Zn) and vitamin D (Vit. D) status in chronic Hepatitis C virus- (HCV) infected patients and their relationship to interleukin- (IL-) 17 and disease severity and then investigate whether Zn and Vit. D3 modulate IL-17 expression in chronic HCV patients.
METHODS:
Seventy patients and fifty healthy subjects were investigated. Serum levels of Zn, Vit. D, and IL-17 were assessed in the patients group and subgroups. Patients lymphocytes were activated in vitro in the presence or absence of Zn or Vit. D3 and then intracellular IL-17 production was assessed using flow cytometry.
RESULTS:
Zn and Vit. D were significantly decreased in HCV patients. Increasing disease severity leads to more reduction in Zn level opposed by increasing IL-17 level. Zn potently reduced IL-17 production in a dose-related fashion; however it did not exert any toxic effects. Although Vit. D apparently increases IL17 expression, it is unclear whether it is due to its toxic effect on cell count or lack of definite association between Vit. D and both IL-17 and disease severity.
CONCLUSIONS:
This study demonstrates that Zn modulates IL-17 expression and provides a rationale for evaluating this compound as a supplementary agent in the treatment of chronic HCV.

Publisher wants $36 for the PDF

Title revision of March 2020 caused the visitor count to reset.
There have actually been 15924 visitors to this page since it was originally made

Vitamin D prevents Hepatitis-C and helps treat it (many studies)         Printer Friendly PDF this page! Follow this page for updates
This page is in the following categories (# of items in each category)
Liver 88 Intervention 638 Virus 379