Conclusion: Patients with PHPT present with a number of distinct biochemical profiles, but as a group present with a near-normal Gaussian distribution of both calcium and PTH. Either serum calcium or PTH remained normal in 13% of patients yet the findings at surgery are similar to those with elevated calcium or PTH. Low vitamin D is an expected finding in patients with PHPT, decreasing as serum calcium levels increased. PMID: 21134884

Background: Vitamin D is an immunomodulator and may affect autoimmune thyroid diseases. Vitamin D has also been shown to influence thyrocytes directly by attenuating the thyrotropin (TSH) stimulated iodide uptake and cell growth. However, it is unclear how vitamin D status is related to TSH at the population level. The goal of the present study was to investigate the relationship between vitamin D status and TSH levels according to thyroid autoantibodies in a population-based health survey in Thailand.

Results: The mean age was 55.0 ± 0.4 (SE) years. Fifty percent of the subjects were males. In subjects positive for serum TgAb, serum TSH levels were higher whereas total serum 25(OH)D levels were lower. In addition, the prevalence of vitamin D insufficiency in TgAb-positive subjects was significantly higher than that observed in TPOAb and TgAb-negative subjects, whether based on cutoff values of 20 or 30 ng/mL: 8.3% vs 5.6%, p < 0.05; or 47.6% vs 42.0%, p < 0.05, respectively. However, vitamin D status was not associated with positive TPOAb and/or TgAb after controlling for gender and age. To explore the probable interaction between vitamin D status and age on serum TSH, analyses were performed according to age tertiles, it was found that higher 25(OH)D levels were independently associated with lower TSH, but only in subjects in the lowest age tertile.

TSH wikipedia which has the following graphic 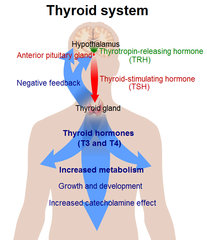 Includes PDF. PPT, and audio of the presentation
Brief summary

Nothing about vitamin D, but interesting

Methods: Our cross-sectional study included subjects who underwent routine health check-ups, which included assays of serum 25-hydroxy vitamin D3 (25(OH)D3) and anti-thyroid peroxidase antibody (TPO-Ab), as well as thyroid ultrasonography (US) between 2008 and 2012 at Asan Medical Center. We defined AITD according to the level of TPO-Ab and US findings.

Note - that is not much of a difference in Vitamin D levels.

CONTEXT:
Low 25-hydroxyvitamin D levels are common in patients with primary hyperparathyroidism (PHPT) and associated with higher PTH levels and hungry bone syndrome after parathyroidectomy (PTX). However, concerns have been raised about the safety of vitamin D supplementation in PHPT.
OBJECTIVE:
We aimed to assess safety and effects on calcium homeostasis and bone metabolism of supplementation with high doses of vitamin D in PHPT patients.
DESIGN, SETTING:
This was an investigator-initiated double-blind, randomized, placebo-controlled, parallel-group trial from a single center.
PATIENTS:
Forty-six PHPT patients were recruited, with a mean age of 58 (range 29-77) years, and 35 (76%) were women.
INTERVENTIONS:
Intervention included daily supplementation with 70 μg (2800 IU) cholecalciferol or identical placebo for 52 weeks. Treatment was administered 26 weeks before PTX and continued for 26 weeks after PTX.
MAIN OUTCOME MEASURES:
PTH, calcium homeostasis, and bone metabolism were evaluated.
RESULTS:
Preoperatively, 25-hydroxyvitamin D increased from 50 to 94 nmol/L in the treatment group and decreased from 57 to 52 nmol/L in the placebo group (P < .001). Compared with placebo, vitamin D decreased PTH significantly by 17% before PTX (P = .01), increased lumbar spine bone mineral density by 2.5% (P = .01), and decreased C-terminal β-CrossLaps by 22% (P < .005). The trabecular bone score did not change in response to treatment, but improved after PTX. Postoperatively, PTH remained lower in the cholecalciferol group compared with the placebo group (P = .04). Plasma creatinine and plasma and urinary calcium did not differ between groups.
CONCLUSIONS:
Daily supplementation with a high vitamin D dose safely improves vitamin D status and decreases PTH in PHPT patients. The vitamin D treatment is accompanied by reduced bone resorption and improved bone mineral density before operation.

(Cached) Printer Friendly PDF this page! Follow this page for updates
This page is in the following categories (# of items in each category)
Overviews 76 Thyroid and parathyroid 69
Edit Comments Files 4