RLS has been treated by Vitamin D, Magnesium and Iron

Unknown amount of vitamin D was given to 12 adults with Restless Legs Syndrome
RLS scores decreased dramatically from 26 down to 10
RLS Scoring is attached at the bottom on this page: 40 = worst to 0 = none
Vitamin D levels went from 9 ng/mL to 25 ng/mL (trial lasted until each patient got > 20 ng: 3-8 months)
Some received vitamin D orally, others by injection.
Dosing was 8,000 IU liquid vitamin D/week OR 200,000 IU injection/ month
&nbspDownload the PDF from Research Gate via Vitamin D Life

Methods: Patients with idiopathic RLS completed questionnaires including the International Restless Legs Severity Scale (IRLSS) and were evaluated for vitamin D deficiency. Patients with deficiency of vitamin D were treated with 50,000 units per week for 2 months. At the end of the 2 months, vitamin D levels were re-measured and disease severity was re-evaluated in patients who reached adequate vitamin D level. Subgroups of IRLSS questionnaire were also analyzed.

Results: Of 35 patients enrolled, 21 (60%) had vitamin D deficiency and received vitamin D therapy. In 2 patients, vitamin D levels did not rise to sufficient levels with supplementation and these 2 patients were excluded from analysis. The remaining 19 patients showed

Selected subscores of the IRLSS were also improved including

Conclusions: The findings suggest that vitamin D levels should be evaluated in patients with RLS and if vitamin D deficiency is revealed, consideration should be given to replacement therap

STUDY OBJECTIVES: The pathophysiology of restless legs syndrome (RLS) may be related to abnormalities in central dopamine pathways. Vitamin D may play a role in the pathophysiology of RLS by modulating the dopaminergic system. The aim of our study is to examine the possible link between RLS and vitamin D deficiency.

METHODS: The total number of subjects enrolled was 201, including 78 patients with RLS based on the International RLS Study Group (IRLSSG) diagnostic criteria and 123 controls. Serum 25-hydroxy vitamin D levels were measured in both groups. RLS severity was assessed in all cases using the IRLSSG symptom severity rating scale.

RLS associated with many other Vitamin D Deficiency diseases - July 2017 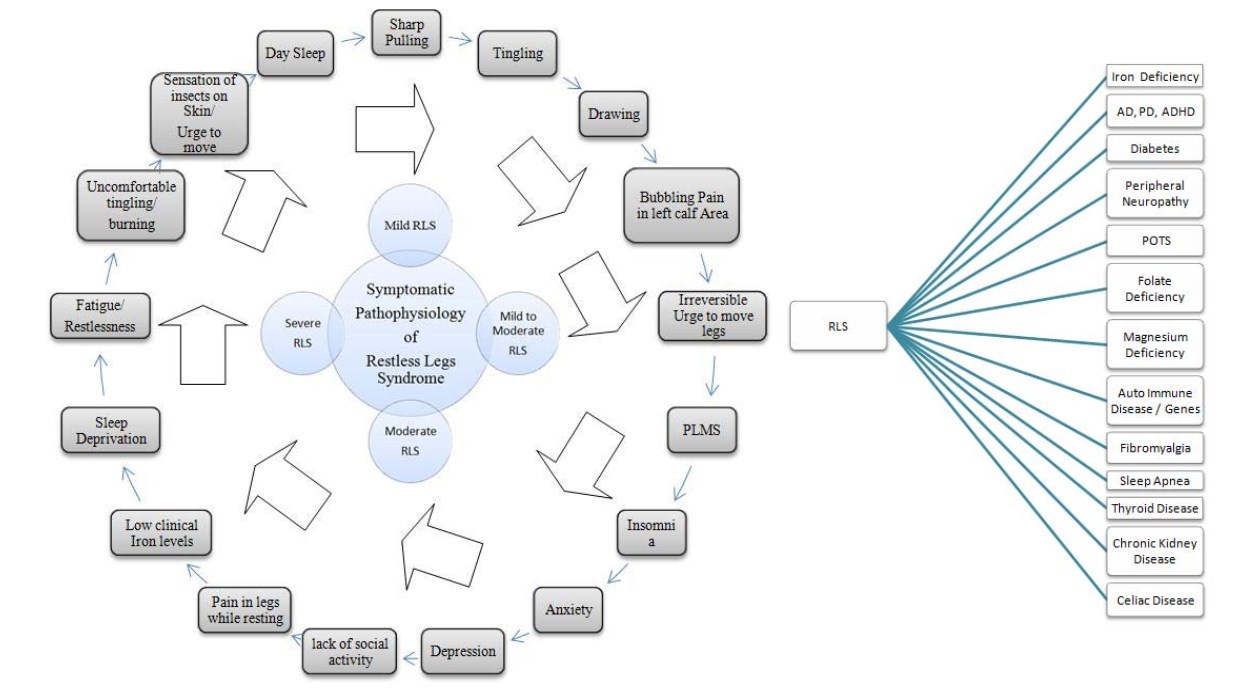 Associated with many other Vitamin D Deficiency Diseases

Restless legs syndrome is a chronic progressive sleep associated sensory motor disorder which develops within the neurological disorders like Parkinsonism, Neuropathy pain and possible dementia. The global prevalence of restless legs syndrome is increasing day by day and research studies have been reported the essential need for research in specific diagnosis and treatment of restless legs syndrome. Prevalence of Restless legs syndrome is more in Female and pregnant women than men in the almost whole world. In India and many other countries of Asia and throughout the world the term Restless legs syndrome (RLS) is still a questionnaire. It is reported many a time by the Physicians, Neurologists and Gynecologists as a mal-diagnosis of Restless legs syndrome in India and in others countries also. The exact pathophysiology of the RLS is still not clear, but some superficial assumptions regarding the progressions of disease and root of disease through the gene molecular concepts. Few Traditional Chinese medicine and allopathic medicine have been reported a successful treatment of RLS, but it is either symptomatic or depends on time management. Dopamine Agonist and opioids are possible symptomatic treatment for RLS, but no treatment is available if it has entered in a severe stage of RLS. Relations to the lower cerebral ferric and Dopamine levels are probably ....

Recent publications on both the genetics and environmental factors of restless legs syndrome (RLS) defined as a clinical disorder suggest that overlapping genetic risk factors may play a role in primary (idiopathic) and secondary (symptomatic) RLS. Following a systematic literature search of RLS associated with comorbidities, we identified an increased prevalence of RLS only in iron deficiency and kidney disease.
In

the methodology of studies was poor, but an association might be possible.

There is insufficient evidence for conditions such as anemia (without iron deficiency), chronic obstructive pulmonary disease, multiple sclerosis, headache, stroke, narcolepsy, and ataxias. Based on possible gene–microenvironmental interaction, the classifications primary and secondary RLS may suggest an inappropriate causal relation. We recognize that in some conditions, treatment of the underlying disease should be achieved as far as possible to reduce or eliminate RLS symptoms. RLS might be seen as a continuous spectrum with a major genetic contribution at one end and a major environmental or comorbid disease contribution at the other.

PURPOSE:
Clinical observation hinted improved symptoms of restless legs syndrome (RLS) after vitamin D supplements. Hence, the aim of this study is to evaluate the effect of vitamin D supplementation on the severity of RLS symptoms.
METHODS:
Twelve adult subjects diagnosed with primary RLS and vitamin D deficiency were recruited. Patients with secondary RLS were excluded from this study. The complete cell count; serum levels of ferritin, iron, glycated hemoglobin, and vitamin D3 (25 (OH) vitamin D); and renal and bone profiles of the patients were assayed. Patients with vitamin D deficiency (<50 nmol/l) were treated with vitamin D3 supplements (high oral dose or intramuscular injection). The severity scores of RLS were reassessed after the vitamin D3 level was corrected to >50 nmol/l and compared with those before the administration of the supplements.
RESULTS:
The median pretreatment vitamin D level was 21.7 nmol/l (13.45-57.4), which improved to 61.8 nmol/l (42.58-95.9) (P = 0.002) with the treatment. The median RLS severity score improved significantly from 26 (15-35) at baseline to 10 (0-27) after correction of the vitamin D levels (P = 0.002).
CONCLUSION:
This study indicates that vitamin D supplementation improves the severity of RLS symptoms and advocates that vitamin D deficiency is conceivably associated with RLS.

BACKGROUND AND AIM:
Restless legs syndrome (RLS) is a distressing sleep disorder that occurs worldwide. Although there have been recent developments in understanding the pathophysiology of RLS, the exact mechanism of the disease has not been well elucidated. An increased prevalence of neurologic and psychiatric diseases involving dopaminergic dysfunction in vitamin D-deficient patients led us to hypothesize that vitamin D deficiency might result in dopaminergic dysfunction and consequently, the development of RLS (in which dopaminergic dysfunction plays a pivotal role). Thus, the aim of this study was to evaluate the relationship between vitamin D deficiency and RLS.

METHODS:
One hundred and fifty-five consecutive patients, 18-65 years of age, who were admitted to the Department of Internal Medicine with musculoskeletal symptoms and who subsequently underwent neurological and electromyography (EMG) examination by the same senior neurologist, were included in this study. The patients were divided into two groups according to serum 25-hydroxyvitamin D (25(OH)D) (a vitamin D metabolite used as a measure of vitamin D status) level: 36 patients with serum 25(OH)D levels ≥20 ng/mL comprised the normal vitamin D group, and 119 patients with serum 25(OH)D levels <20 ng/mL comprised the vitamin D deficiency group. The two groups were compared for the presence of RLS and associated factors.

RESULTS:
The two groups were similar in terms of mean age, sex, mean body mass index (BMI), and serum levels of calcium, phosphate, alkaline phosphatase (ALP), and ferritin. The presence of RLS was significantly higher in the vitamin D deficiency group (χ (2)=12.87, P<0.001). Regression analysis showed vitamin D deficiency and serum 25(OH)D level to be significantly associated with the presence of RLS (odds ratio [OR] 5.085, P<0.001 and OR 1.047, P=0.006, respectively).

CONCLUSION:
The present study demonstrated a possible association between vitamin D deficiency and RLS. Given the dopaminergic effects of vitamin D, 25(OH)D depletion may lead to dopaminergic dysfunction and may have a place in the etiology of RLS. Prospective vitamin D treatment studies are needed to confirm this relationship and to evaluate the efficacy of vitamin D as a treatment for RLS patients.

Periodic limb movements during sleep (PLMS), with or without symptoms of a restless legs syndrome (RLS), may cause sleep disturbances. The pharmacologic treatments of choice are dopaminergic drugs. Their use, however, may be limited due to tolerance development or rebound phenomena. Anecdotal observations have shown that oral magnesium therapy may ameliorate symptoms in patients with moderate RLS. We report on an open clinical and polysomnographic study in 10 patients (mean age 57 +/- 9 years; 6 men, 4 women) suffering from insomnia related to PLMS (n = 4) or mild-to-moderate RLS (n = 6). Magnesium was administered orally at a dose of 12.4 mmol in the evening over a period of 4-6 weeks. Following magnesium treatment, PLMS associated with arousals (PLMS-A) decreased significantly (17 +/- 7 vs 7 +/- 7 events per hour of total sleep time, p < 0.05). PLMS without arousal were also moderately reduced (PLMS per hour of total sleep time 33 +/- 16 vs 21 +/- 23, p = 0.07). Sleep efficiency improved from 75 +/- 12% to 85 +/- 8% (p < 0.01).
In the group of patients estimating their sleep and/or symptoms of RLS as improved after therapy (n = 7), the effects of magnesium on PLMS and PLMS-A were even more pronounced. Our study indicates that magnesium treatment may be a useful alternative therapy in patients with mild or moderate RLS-or PLMS-related insomnia. Further investigations regarding the role of magnesium in the pathophysiology of RLS and placebo-controlled studies need to be performed. 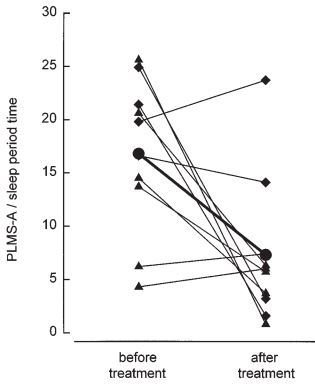 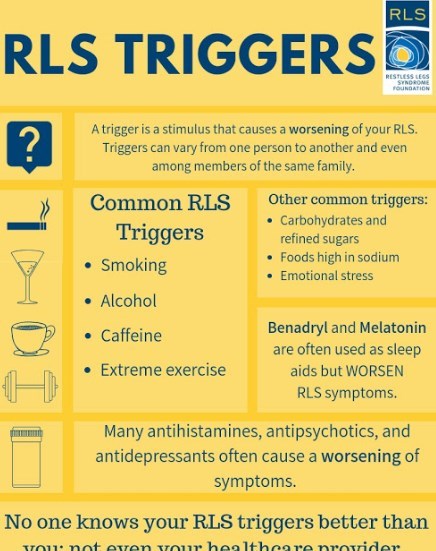 This page was renamed April 2018. There have actually been 146676 visitors to this page since it was originally made

Restless Legs Syndrome dramatically reduced by vitamin D, etc         (Cached) Printer Friendly PDF this page! Follow this page for updates
This page is in the following categories (# of items in each category)