Learn how Vitamin D is essential for good health
Watch a 5 minute video "Does Less Sun Mean more Disease?"
Browse for other Health Problems and D in left column or here
see also Supplementing and More in the menu at the top of every page
If you have a disease associated with low Vit D take Vit D
Raising your Vit D levels will substantially prevent other low-Vit D health problems
Often your specific health problem will also be treated

Items in both categories Autoimmune and Infant/Child are listed here:

Vitamin D deficiency definition varies
This article is similar to many countries: < 20 ng
The lower the vitamin D level, the more allergies each child had

OBJECTIVE: To investigate the association between serum vitamin D levels, sensitization to food allergens, and the severity of atopic dermatitis in infants.

STUDY DESIGN: We investigated serum 25-hydroxyvitamin D (25[OH]D) and specific immunoglobulin E levels to common or suspected food allergens in 226 infants with atopic dermatitis or food allergy. The severity of atopic dermatitis by the Scoring Atopic Dermatitis index and amount of vitamin D intake was measured in subcohort children. Sensitization to food allergen was categorized by the number (non-, mono-, and poly-) of sensitized allergens and the degree (undetected-, low-, and high-level) of sensitization.

In addition, the9% of US adults b elieve they have a food alllery Scoring Atopic Dermatitis index was independently related to 25(OH)D levels after adjusting for the level of sensitization (adjusted R(2) = 0.112, P = .031). 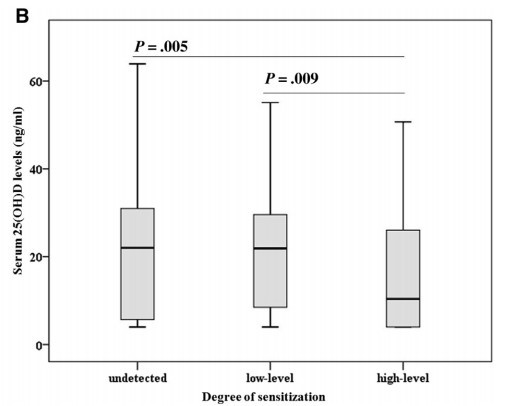 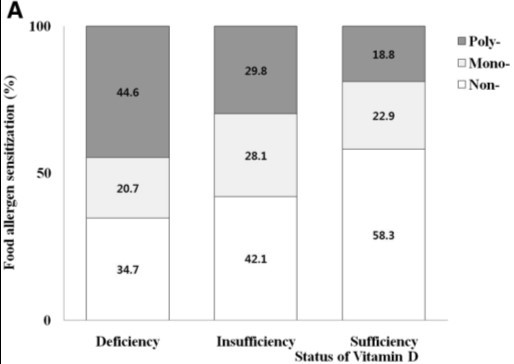 1 page item had the following results 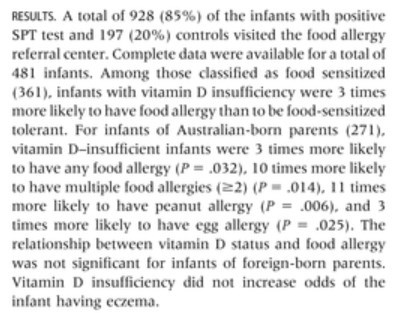 Objective: We sought to test the association between serum 25-hydroxyvitamin D (25[OH]D) deficiency (<15 ng/mL) and insufficiency (15-29 ng/mL) and allergic sensitization measured by serum IgE levels in a US nationally representative sample of 3136 children and adolescents and 3454 adults in the National Health and Nutrition Examination Survey 2005-2006.

Results: In children and adolescents allergic sensitization to 11 of 17 allergens was more common in those with 25(OH)D deficiency. Compared with sufficient vitamin D levels of greater than 30 ng/mL, after multivariate adjustment, 25(OH)D levels of less than 15 ng/mL were associated with

Eight other allergens were associated with 25(OH)D deficiency, with P values of less than .05 but greater than .01.
There were no consistent associations seen between 25(OH)D levels and allergic sensitization in adults.

Conclusion: Vitamin D deficiency is associated with higher levels of IgE sensitization in children and adolescents.
Further research is needed to confirm these findings.

Food allergies are becoming increasingly prevalent, especially in young children. Epidemiological evidence from the past decade suggests a role of vitamin D in food allergy pathogenesis. Links have been made between variations in sunlight exposure, latitude, birth season and vitamin D status with food allergy risk. Despite the heightened interest in vitamin D in food allergies, it remains unclear by which exact mechanism(s) it acts. An understanding of the roles vitamin D plays within the immune system at the cellular and genetic levels, as well as the interplay between the microbiome and vitamin D, will provide insight into the importance of the vitamin in food allergies. Here, we discuss the effect of vitamin D on immune cell maturation, differentiation and function; microbiome; genetic and epigenetic regulation (eg DNA methylation); and how these processes are implicated in food allergies.
&nbspDownload the PDF from Vitamin D Life

Prenatal vitamin D status and respiratory and allergic outcomes in childhood: A meta-analysis of observational studies. 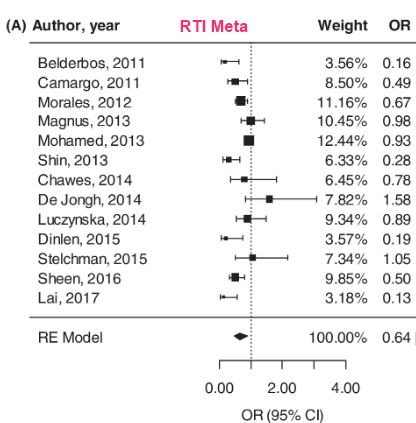 Pediatric allergy and immunology, DOI:10.1111/pai.12876
not on sci-hub as of Jan 2019 but can be read in DeepDive
Rosa M Pacheco-González, L Garcia-Marcos, Eva Morales

BACKGROUND: Prenatal vitamin D status may influence offspring's respiratory and allergic outcomes; however, evidence is inconclusive. A systematic review and meta-analysis were conducted on the association between 25-hydroxyvitamin D [25(OH)D] levels in maternal blood in pregnancy or cord blood at birth with the risk of offspring's respiratory and allergic conditions.

RESULTS: A total of 34 from 547 retrieved articles were included. Increased prenatal exposure to 25(OH)D was inversely associated with risk of RTIs. Comparing the highest with the lowest category of 25(OH)D levels, the pooled odds ratio was 0.64 (95% CI 0.47, 0.87). A positive borderline association was found for lung function at school age (FEV1 z-score coefficient 0.07, 95% CI -0.01, 0.15). No associations were found for wheeze, asthma, atopic eczema, allergic rhinitis, and allergic sensitization.

CONCLUSION: The introduction of public health measures to tackle vitamin D status in pregnancy may reduce the burden of RTIs in offspring. Current evidence does not support an impact on asthma and allergy.

Current evidence supports a role for gut colonization in promoting and maintaining a balanced immune response in early life. An altered or less diverse gut microbiota composition has been associated with atopic diseases, obesity, or both. Moreover, certain gut microbial strains have been shown to inhibit or attenuate immune responses associated with chronic inflammation in experimental models. However, there has been no fully adequate longitudinal study of the relation between the neonatal gut microbiota and the development of allergic diseases (eg, atopic asthma) and obesity. The emergence of promising experimental studies has led to several clinical trials of probiotics (live bacteria given orally that allow for intestinal colonization) in human subjects. Probiotic trials thus far have failed to show a consistent preventive or therapeutic effect on asthma or obesity. Previous trials of probiotics have been limited by small sample size, short duration of follow-up, or lack of state-of-the art analyses of the gut microbiota. Finally, there is emerging evidence that the vitamin D pathway might be important in gut homeostasis and in signaling between the microbiota and the host. Given the complexity of the gut micriobiota, additional research is needed before we can confidently establish whether its manipulation in early life can prevent or treat asthma, obesity, or both.

PDF is at the bottom of this page

Objective The aim of this study was to describe the distribution of childhood food allergy in the United States.

Methods A randomized survey was administered electronically from June 2009 to February 2010 to adults in US households with at least 1 child younger than 18 years. Data were analyzed as weighted proportions to estimate prevalence and severity of food allergy by geographic location. Multiple logistic regression models were constructed to estimate the association between geographic location and food allergy.

Conclusions An association between urban/rural status and food allergy prevalence was observed.

Printer Friendly PDF this page! Follow this page for updates
This page is in the following categories (# of items in each category)
Breathing 366 Autoimmune 162 Youth 145 Infant-Child 589
Edit Comments Files 12