PDF is available free at Sci-Hub 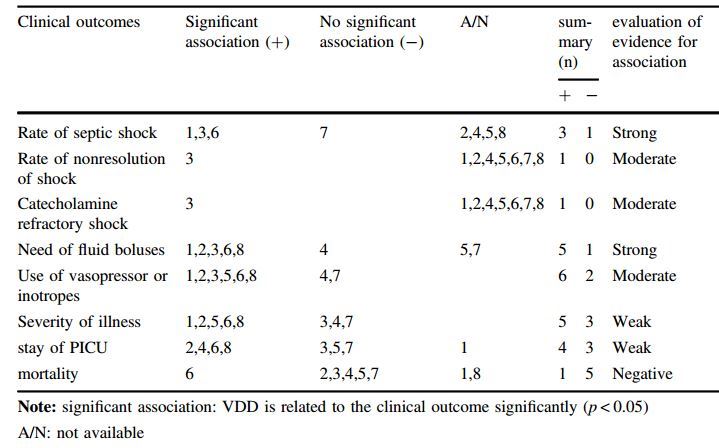 Purpose
Low vitamin D blood levels are related to many clinical outcomes in children with critically illness. However, the relationship of it and septic shock has not been systematically analyzed. The objective of this review was to evaluate the effect of vitamin D on septic shock and predict if vitamin D administration can improve prognosis of it.

We summarized the strength of association between VDD and each factor on septic shock. Individual factors were defined as strong, moderate, weak, or inconclusive according to the numbers of the article supporting the relation between them.

Results
Eight studies published between 2012 and 2017, for a total of 1367 patients, were included in the final analysis. We extracted eight patient-level factors and among them one showed strong association of VDD and septic shock. Four factors demonstrated moderate or weak strength of evidence for it: nonresolution of shock, catecholamine refractory shock, fluid boluses, vasopressor use. But evidence for the association between VDD and severity of illness, stay of pediatric intensive care unit (PICU), are weak. Most of the articles showed no significant association between VDD and mortality.

Conclusions
Among critically ill children, VDD might be associated with the occurrence and resolution of septic shock. A larger multicenter trial could conclusively confirm these findings. Further research is also needed to identify vitamin D administration for better outcomes in pediatric patients.

Unclear if septic shock in children is fought by Vitamin D – July 2018         Printer Friendly PDF this page! Follow this page for updates
This page is in the following categories (# of items in each category)
Infant-Child 606