Sepsis reduced the Omega-3 response and half life – April 2019

Omega-3 and Inflammation (items in both categories)

&nbspDownload the PDF from Sci-Hub via Vitamin D Life 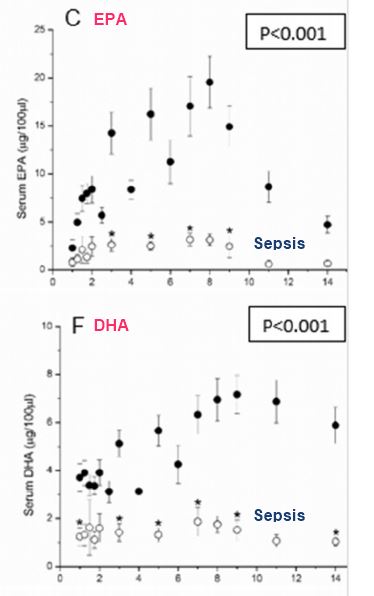 Results
Healthy volunteers were 41.1 ± 10.3 years; 67% were women. In patients with severe sepsis (55.6 ± 13.4 years, 50% women), acute physiologic and chronic health evaluation (APACHE) II score was 27.2 ± 8.8 at ICU admission and median MV duration was 10.5 days. Serum EPA and DHA were significantly lower in sepsis vs. healthy subjects over time. PBMC EPA concentrations were generally not different between groups over time, while PBMC DHA was higher in sepsis patients. Neutrophil EPA and DHA concentrations were similar between groups. The half-life of EPA in serum and neutrophils was significantly shorter in sepsis patients, whereas other half-life parameters did not vary significantly between healthy volunteers and sepsis patients.

Conclusions
While incorporation of n-3 FAs into PBMC and neutrophil membranes was relatively similar between healthy volunteers and sepsis patients receiving identical high doses of fish oil for one week, serum EPA and DHA were significantly lower in sepsis patients. These findings imply that serum concentrations and EPA and DHA may not be the dominant driver of leukocyte membrane incorporation of EPA and DHA. Furthermore, lower serum EPA and DHA concentrations suggest that either these n-3 FAs were being metabolized rapidly in sepsis patients or that absorption of enteral medications and pharmaconutrients, including fish oil, may be impaired in sepsis patients. If enteral absorption is impaired, doses of enteral medications administered to critically ill patients may be suboptimal.

Sepsis reduced the Omega-3 response and half life – April 2019         (Cached) Printer Friendly PDF this page! Follow this page for updates
This page is in the following categories (# of items in each category)
Vitamin D and Omega-3 330 Inflammation 135