Dietary Vitamin D and Its Metabolites Non-Genomically Stabilize the Endothelium

Vitamin D is a known modulator of inflammation. Native dietary vitamin D3 is thought to be bio-inactive, and beneficial vitamin D3 effects are thought to be largely mediated by the metabolite 1,25(OH)2D3. Reduced serum levels of the most commonly measured precursor metabolite, 25(OH)D3, is linked to an increased risk of multiple inflammatory diseases, including:

Common to all of these diseases is the disruption of endothelial stability and an enhancement of vascular leak. We previously performed an unbiased chemical suppressor screen on a genetic model of vascular instability, and identified cholecalciferol (D3, dietary Vitamin D3) as a factor that had profound and immediate stabilizing and therapeutic effects in that model. In this manuscript we show that the presumed inactive sterol, D3, is actually a potent and general mediator of endothelial stability at physiologically relevant concentrations. We further demonstrate that this phenomenon is apparent in vitamin D3 metabolites 25(OH)D3 and 1,25(OH)2D3, and that the effects are independent of the canonical transcription-mediated vitamin D pathway. Our data suggests the presence of an alternative signaling modality by which D3 acts directly on endothelial cells to prevent vascular leak. The finding that D3 and its metabolites modulate endothelial stability may help explain the clinical correlations between low serum vitamin D levels and the many human diseases with well-described vascular dysfunction phenotypes.

Clipped from PDF
“Surprisingly, the purportedly inactive dietary form, D3, was the most potent of the
three sterols across the range of doses from 100 pM to 10 μM.

Discussion
Our data show that vitamin D3 and its metabolites, 25(OH)D3, and 1,25(OH)2D3, can modulate
endothelial stability even in the face of diverse inflammatory cues such as cytokines and
lipopolysaccharides. This stabilizing effect, combined with our prior observation that D3
preserves vascular integrity in cells deficient in CCM2, suggests there may exist a novel function
for vitamin D3 in homeostasis by directly maintaining or enhancing the barrier function of the
endothelium. Importantly, we also show that the barrier-enhancing function of vitamin D3 is
not limited to what is commonly referred to as the “active metabolite” 1,25(OH)2D3, but this
activity is present in the “inactive” dietary and mono-hydroxylated forms of the vitamin as well.

Vitamin D has received much attention over the last decade due to the inverse correlation
between serum levels of 25(OH)D3 and the leading causes of death: cardiovascular disease,
stroke, COPD, infection, cancer, as well a number of autoimmune diseases [29, 47]. Vascular
instability is a hallmark of such inflammatory diseases, and we and others have previously
demonstrated that prevention of vascular destabilization reduces pathology in inflammatory
diseases arthritis and septic shock [21–23, 48–50]. In many of the reports characterizing a
relationship between 25(OH)D3 and disease, D3 concentration is ignored and investigators
have presumed that 25(OH)D3 is not itself active in these disease states [29, 47].

“ . . . raise the interesting possibility that inverse correlations between serum 25(OH)D3 levels and certain diseases could be due to the direct effects of D3 and 25(OH)D3 on endothelial stability.”

" In humans, circulating serum levels of D3 and 25(OH)D3 are present in the nanomolar range,
approximately 1,000 fold higher than 1,25(OH)2D3[28]. These data raise the possibility that
the traditionally ‘inactive’ metabolites D3 and 25(OH)D3 might play more prominent roles in
controlling endothelial stability and disease compared to 1,25(OH)2D3, which is not reported
to circulate at levels necessary for the observed stabilizing phenomena"

Do not recall seeing this before
A very important concept if it turns out to be true
Might reduce the importance, for some diseases, of

I had wondered how topical Vitamin D could provide local benefit if it had to get processed by the liver and kidney then find its way back to the topical site. This study seems to indicate that "inactive" vitamin D provides some benefits without processing. 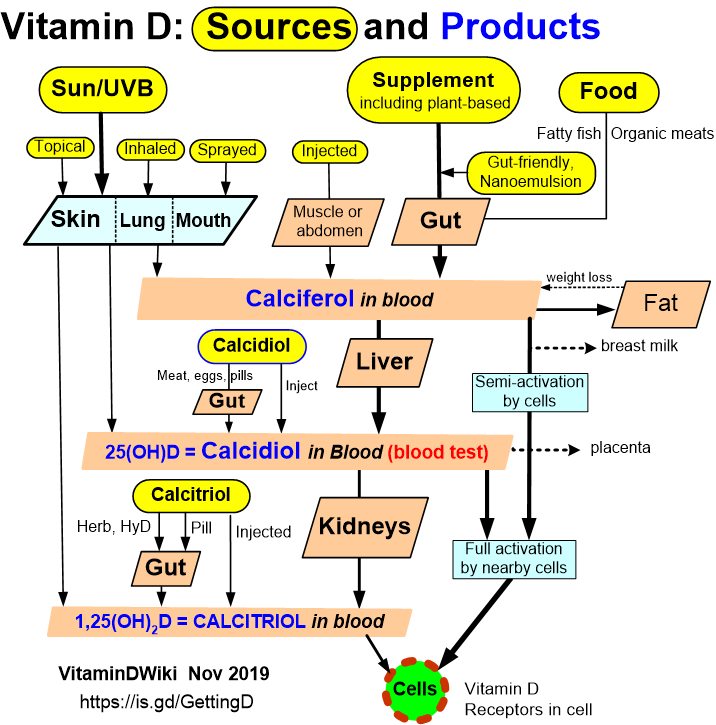 Which include the following